Goes from clean to crunchy to full-throated, meaty slabs of sustaining distortion while retaining string definition and full articulation. The three-band eq is flexible and creates a beefy, classic 70's rock voice.

The sag knob controls the optical compressor/limiter circuit to tighten up the output at clockwise or permit full, punchy, wall-shaking dynamics at counter-clockwise. You might find you're "in the pocket" with the SAG control at about noon 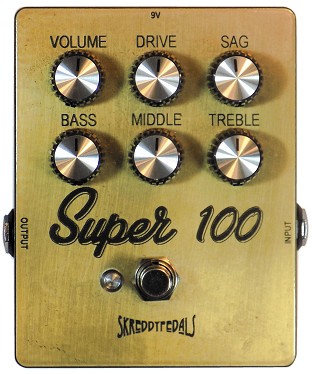 The Super 100 responds very much like a tube amp would to your pickup volumes and to the impact of running other effect pedals in front of it.

Run it by itself or stacked with your favorite drive, boost, or fuzz

I worked on this sound so that it would do justice to the cranked-amp live tones of Hendrix and Page and made sure it didn't go too far so it would remain firmly grounded in the 60's era (in other words, you will have to push it with a booster or fuzz or distortion or overdrive to get it over the top, just like you would have to with a Marshall Super Lead). It has a certain "big, round" quality, just slightly chunky, as opposed to the ultra-streamlined, slick distortion of the later JCM-800 series amps popularized by 80's metal bands. Yes, it distorts, but not in the way of a buzz saw. Rather it tends to hold together and render some chiminess even at max drive.