The Skreddy Pedals™ LZ-129 is based on the circa 1969 Univox Uni-Drive*, which took the form of a volume pedal with a couple of controls on its front face. The two controls 1) set the drive level (by means of 6-way rotary switch that acted as a volume control for the incoming signal) and 2) the bottom range for the volume that was controlled by the treadle.

The original Uni-Drive was evidently intended to push a cranked, dirty amp into overdrive, seeing how it offered no clipping of its own, negligible added sustain (on the contrary; a very dynamic and un-compressed response), and a very loud output signal that was fuzzy when the gain was up high but with still very prominent signal peaks. So I added a unique clipping section that will help emulate some "cranked amp" softness, distortion, and compression into a clean amp that has plenty of headroom without the need to shatter windows or eardrums. I also added a gentle high-cut filter to its output.

The tone tends to be clear on the high strings and fuzzier on the low strings. You will hear this effect on many songs from the first two Led Zeppelin albums, like the breakout solo in "Heartbreaker" and many more, such as "Communication Breakdown," and I'm pretty sure the solo to "Black Dog" too (which was on LZIV).

* The terms "Univox" and "Uni-Drive" are only being used for comparison and are not owned or trademarked by Skreddy Pedals nor is this a claim that my product is identical. 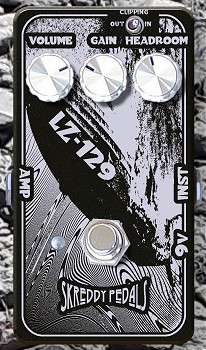 "Tone is in your fingers"

Yes; especially when using a dirty boost instead of a fuzz. There is plenty of character in this pedal to give you more of what you want, more of that clean-yet-dirty sound, more power, more drive, more responsiveness, more articulation on high notes and more distortion on the low notes. It is full of vintage personality yet relies on you to actually make everything happen with your own fingers. It's not a sustainy fuzz! Much more focused on the attack.

Blast your amp hard, or use the built-in clipping to emulate a dirty amp's breakup and compression

You will get equal enjoyment out of the LZ-129 whether pushing a dirty amp into distortion or keeping your volume at unity gain into a clean amp.

You can control how much of the signal is clipped by the proprietary, amp-like clipping section by means of the "HEADROOM" control, and, if you like the full, loud signal peaks, you can take the clipping section completely out of the circuit via the mini toggle.