The Skreddy Pedals™ ROVER can do that wooly, compressed 60's fuzz tone, but it can also be tight and articulate and well behaved.

The sound is classic Tone Bender* with excellent volume clean-up and touch sensitivity.

You can go sustainy or you can go twangy!  The ROVER has the versatility you've been searching for.

With it's "wool" control, you can dial in anything from tight, hot, articulate distortion to SAGGY, brick-wall-compressed FUZZ.

The term "Tone Bender" is a trademark of someone else's and is only being used for comparison.

What is the Precision Series?

Live in Japan? Want to try the Japanese version? 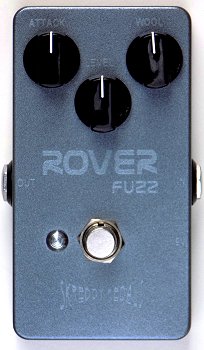 Allow about 3 months for us to get through our list and make your pedal.

Sustaining wall of fuzz, meaty distortion, and hot overdrive, all featuring excellent volume cleanup and touch sensitivity and no problems getting along with other effects like buffers and wah pedals

This is oldschool fuzz you won't have to worry about when you play an outdoor gig--it's stable throughout any survivable temperature range!

@SkreddyPedals' Rover is so much more than just a good Bender clone...

roving around, ya know.
no looping.

accidental use of additional reverb in mix; ha!

Video is queued up to the point where he kicks on the Skreddy ROVER for his solo. Starts out with low guitar volume, then jumps into fuzz mode by cranking his volume...
Chris Barron feat. Atlantis Philharmonics: Scotch and Water Blues

somewhere between an amazing underfuzz and a ToneBender MkIV, with other waystations like TB MkII (and maybe even FF?); freaking excellent vol-ctrl clean-up & response, ditto your tone-controls. can get really wooly, can show some sharp fangs at the same time. can do truly fat underfuzz, with clean-up! feels and sound like that combo of those 2 cool cornish pedals, played simultaneously: ride the wool- vs. the fuzz-ctrls, whoa: beautiful, with a hint of horrifying. very, very cool, imo; way into it, here, for the past 2 weeks.

just a bump for being late to the rover show; freaking great fuzz!

the Rover is just its own killer fuzz, ime, but wanders somewhere within spitting distance of the ToneBender MkII camp..... but with more range.

i think it's a familiar but still unique, cutting, sticky and/or greasy/fat range of voices with noticeable ToneBender snarl; it cleans up with the volume control really, really well, which's important to me.

The wool control takes it from polite to gnarly. Amazing. Better than I ever expected.

I love the sound of a Tone Bender MkII. How I get that sound is immaterial, so I was thrilled to learn that Marc 'Skreddy' Ahlfs released a silicon take on this classic germanium fuzz...

I finally got my Skreddy Rover Fuzz and immediately took it to practice, with minimal fussing about (at that moment...) it sounded amazing and cut right through the band mix effortlessly. Cleans up like a very good silicon Fuzz Face (Crest Audio FF?) but with that unmistakeable Tone Bender rasp. Great with the Les Paul and sounds even better with the humbuckers split into single coil. Now that I have time to mess with it, I just can't stop playing it! Thanks Marc!

It's awesome. Does the tone bender thing for great Zep sounds, also roll off the volume and get some beautiful overdrive. Great great sounding pedal. I run mine into a slightly driven Marshall DSL50 and it doesn't have a bad sound in it.

I have a Skreddy Rover and think its stellar. I use it with single coils and its voiced in a sweet range that always super useful.

I have one and I love it... but I'm using a Tele with low-output single coils into a pretty clean amp, so I can't speak directly to your concern. It's really well done, though, and the controls are very versatile and usable throughout their whole range, so I imagine it can be adjusted to work in just about any context.

I have one. It's awesome. Sounds amazing into a dirty amp. (EDIT: It's a DR Z Carmen Ghia. I also used it with a Fender Champ 600. Both relatively dirty. BTW, I am playing with an EQD Monarch at the end of the chain, so it's always like a dirty amp)

It has only encountered one humbucker though. WRHB in the neck position of a tele custom.

Sounded awesome. Seriously. It's like a more versatile Kusanagi that will go more gnarly OR more refined.. Outstanding.